Triumph of the Nerds: The Rise of Accidental Empires

Apple must make Macintosh a standard 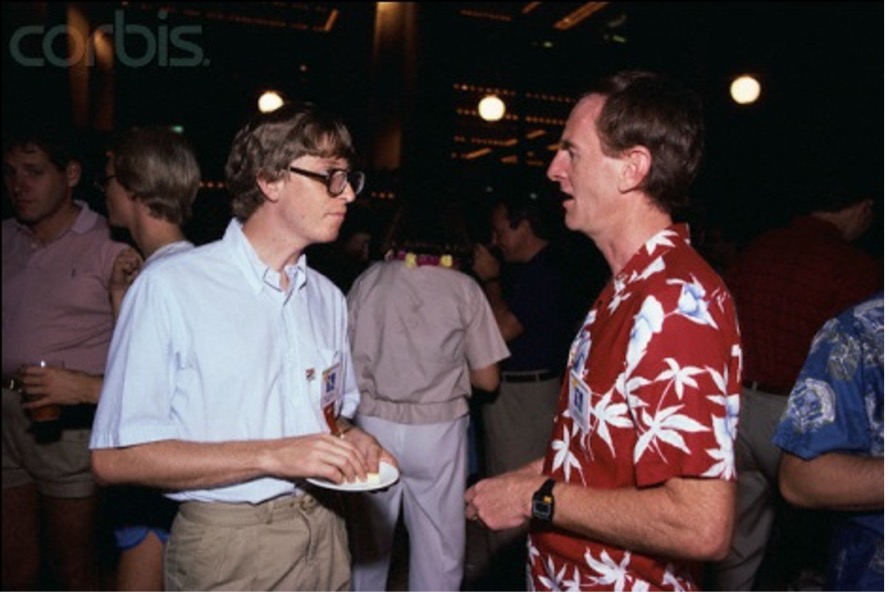 [“The computer was never the problem. The company’s strategy was. Apple saw itself as a hardware company; in order to protect our hardware profits, we didn’t license our operating system. We had the most beautiful operating system, but to get it you had to buy our hardware at twice the price. That was a mistake. What we should have done was calculate an appropriate price to license the operating system. We were also naive to think that the best technology would prevail. It often doesn’t”]

Apple's stated position in personal computers is innovative technology leader. This position implies that Apple must create a standard on new, advanced technology. They must establish a "revolutionary" architecture, which necessarily implies new development incompatible with existing architectures.

The significant investment (especially independent support) in a "standard personal computer" results in an incredible momentum for its architecture. Specifically, the IBM PC architecture continues to receive huge investment and gains additional momentum. (Though clearly the independent investment in the Apple II, and the resulting momentum, is another great example.) The investment in the IBM architecture includes development of differentiated compatibles, software and peripherals; user and sales channel education; and most importantly, attitudes and perceptions that are not easily changed.

Any deficiencies in the IBM architecture are quickly eliminated by independent support. Hardware deficiencies are remedied in two ways:

expansion cards made possible because of access to the bus (e.g. the high resolution Hercules graphics card for monochrome monitors)

manufacture of differentiated compatibles (e.g. the Compaq portable, or the faster DeskPro).

The closed architecture prevents similar independent investment in the Macintosh. The IBM architecture, when compared to the Macintosh, probably has more than 100 times the engineering resources applied to it when investment of compatible manufacturers is included. The ratio becomes even greater when the manufacturers of expansion cards are included.

As the independent investment in a "standard" architecture grows, so does the momentum for that architecture. The industry has reached the point where it is now impossible for Apple to create a standard out of their innovative technology without support from, and the resulting credibility of other personal computer manufacturers. Thus, Apple must open the Macintosh architecture to have the independent support required to gain momentum and establish a standard.

The Mac has not become a standard

The Macintosh has failed to attain the critical mass necessary for the technology to be considered a long term contender:

Since there is no "competition" to Apple from "Mac-compatible" manufacturers, corporations consider it risky to be locked into the Mac, for reasons of price AND choice.

Recent negative publicity about Apple hinders the credibility of the Macintosh as a long term contender in the personal computer market.

Independent software and hardware manufacturers reinforced the risky perception of the machine by being slow to come out with key software and peripheral products.

Apple's small corporate account sales force has prevented it from having the presence, training, support, etc. that large companies would recognize and require.

Nationalistic pressures in European countries often force foreign to consumers [sic] choose local manufacturers. Europeans have local suppliers of the IBM architecture, but not Apple. Apple will lose ground in Europe as was recently exhibited in France.

Apple should license Macintosh technology to 3-5 significant manufacturers for the development of "Mac Compatibles":

United States manufacturers and contacts: Ideal companies—in addition to credibility, they have large account sales forces that can establish the Mac architecture in larger companies:

Apple should license the Macintosh technology to US and European companies in a way that allows them to go to other companies for manufacturing. Sony, Kyocera, and Alps are good candidates for OEM manufacturing of Mac compatibles.

Microsoft is very willing to help Apple implement this strategy. We are familiar with the key manufacturers, their strategies and strengths. We also have a great deal of experience in OEMing system software.

In 1994 Intel released their Pentium P5 processor which contained a floating point bug dubbed the Pentium FDIV bug. The bug and Intel's handling of it caused quite an uproar in the industry.

In 1995 the following interpretation of one of Nostradamus' quatrains was posted to the Internet.

It contains a very in depth analysis that shows either Nostradamus predicted the development of microprocessors and a specific bug or his quatrain can be stretched to match many world events, large and small.

Subject: More about Nostradamus vs In-tell

A month ago, I posted a quatrain in which Nostradamus predicted the Pentium scandal. The messages was rather short, and didn't give any details of the interpretation. During the last month, I discussed about this prediction with other readers, and we found out plenty of stuff.

For those who missed the original post, here is the relevant quatrain: C 2,VI:

and its translation to English:

Near the gates and inside two cities

Will be TWO FLAWS, and nobody noticed it [from] INTEL

Hunger, pest inside, by steel people thrown out

Cry for help to the great immortal God.

The spelling is not quite correct: a V instead of an I, and an extra space between N and T. The word resembles more the french expression 'un tel' (meaning 'such', 'what-s-his-name', 'same' or 'some person') especially since u's and v's are often substituted. Critics could say that 'un tel' would be a common French expression, and dismiss the prediction as pure chance. However, the words 'vn tel' occur only once in all the quatrains, and that's here!

The space in VN TEL is maybe a hint at a pun. In could be a prefix meaning 'not', and in-tel[l] = those who do not tell (Like in in-correct = not correct, in-divisble = not divisible, im-precise = not precise). If we consider the v as an u, we keep this meaning: un-professional = not professional, un-tested = not tested.

V is also the roman numeral 5, as in 586, PENTium, or 5 missing lookup fnord table entries (which caused the bug).

The repetition of INSIDE:

In this quatrain, the word 'inside' (dedans) occurs twice, which is remarkable, considering that it only occurs 24 times in total in all the quatrains. This must have a meaning. You guessed it: The 'In-tell Inside' advertisement campaign.

The number 24 itself also has a meaning: It's the mean time between division errors (in days) for normal spreadsheet usage according to IBM's analysis. Nostradamus himself believed IBM (24 days) more than In-tell (27000 years)!

There are some doubts whether these refer to Bill Gate$, or rather to the logical gates on the microprocessor.

Here we have two interpretations too:

Obvious. The FDIV flaw, and the yet-to-be discovered integer flaw.

In-tell's _greed_, which made them hide the flaw and minimize it later. The hunger may also hint at In-tell's bankruptcy after the second flaw will be discovered by the public. In-tell will lose almost all its market share, and many employees will lose their jobs.

Nostradamus' version of 'In-tell Inside' :-)

Steel = hardware. This is not a SOFTware bug (as most bugs), but a HARDware bug. (And in the traditional sense, hardware means 'steel tools')

Initially In-tell 'threw out' (turned down) people asking for a replacement chip, because they were not deemed worthy.

Another interpretation would be that people threw out their chips. (Re-arrange the words: 'By people steel thrown out')

Btw, the French word 'bouter' is used nowadays to mean 'to boot [a computer]'. Yet another hint that Nostradamus is indeed speaking about computers.

Cry for help to the great immortal God.

According to Phil, this means:

They cry for help from the Law

There will always be the Law, in any civilization -- there's nothing certain except death and taxes, as they say -- so Law is a great immortal God of civilization.

They cry for help from the Federal Government of the U.S.

Usually, computer people have a negative attitude towards lawyers. Lawyers are considered to be profiteers and to block progress with idiotic ideas such as 'look & feel' lawsuits and software patents.

But these same computer people were so upset at In-tell's scam that some resorted to the hated lawyers to fight against In-tell. Many people filed suits in small claims courts, some even filed class-action suits! Finally State Attorneys General's intervened, and forced In-tell to change its policy!

The number of the quatrain:

The number may hide the date, June 2nd, when In-tell discovered the bug themselves.

Why did Nostramus speak about this incident?

Now, why did Nostradamus predict this seemingly insignificant incident? Usually he speaks about wars, revolutions and catastrophes, and now he speaks about microprocessor bugs! Well there's more behind this affair than meets the eye. It was the first time in history that the consumership forced a megacorporation to change its policy to meet their true needs. This incidents establishes new rules in the relationship between consumers and megacorporations. Consumers are no longer powerless, and megacorporations are no longer allmighty.

Other corporations have already seen this new trend, and gave up past arrogant attitudes. For instance, Diamond now supplies programming information for their video cards. A few month ago, consumers had to sign non-disclosure agreements in order to learn how to use their expensive video cards!

This new relationship will not be limited to the commerce, but spread to politics too. We'll see more and more net-petitions.

The new communication media will give the people more power. This incident marks a turning point in the relations of power, the ringing of the division bell has begun!

That's why they try to limit the liberty of speech using ludicrous pretexts. Fortunately, there are anonymous remailers :-)

That's why they spread rumors about computer "geeks".

That's why they raid computer game stores without an apparent reason.

That's why they pass laws against cryptography and secure communication.

The whole incident is about more than just a chip which can't compute 5 / 15 correctly!